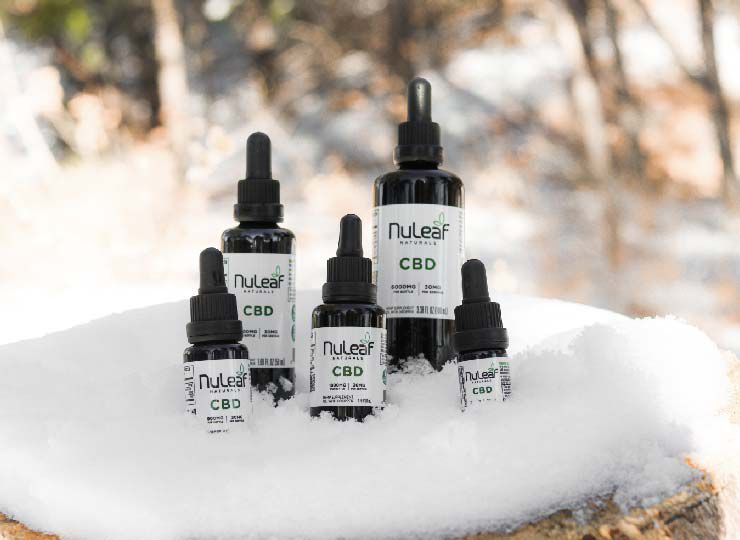 With the growing popularity of cannabis wellness products, more and more people are talking about the endocannabinoid system (or ECS, for short), an internal cell-signaling network that works to regulate a host of functions in the body, including metabolism, mood, sleep, immune response, and memory. If that sounds a little complicated, don’t worry — we’re going to break it all down for you today in layperson’s terms. In this guide to the endocannabinoid system for dummies, we’ll cover what this system is, why it’s important, and how it’s impacted by CBD and other cannabinoids, in a way that anyone can understand.

How Does the Endocannabinoid System Work?

The ECS comprises three component parts: endocannabinoids, cannabinoid receptors, and enzymes. These work together to create homeostasis, or simply put, a state of balance within the body’s internal systems. The ECS interacts with numerous parts of the body, constantly making precise adjustments in order to maintain a consistent state of equilibrium.

Endocannabinoids bond with different cannabinoid receptors in both the central and peripheral nervous systems, as well as in immune cells — the two primary receptors being CB1 and CB2. Then, special enzymes go to work, helping to break down any already-used or excess endocannabinoids, further assisting in maintaining homeostasis.

Some of the key functions that the ECS helps to regulate include:

You’ve probably heard the term cannabinoid used to refer to tetrahydrocannabinol (THC) or cannabidiol (CBD) — the two most well-known compounds in the cannabis sativa plant. But there’s more to it than that, so let’s take a closer look. 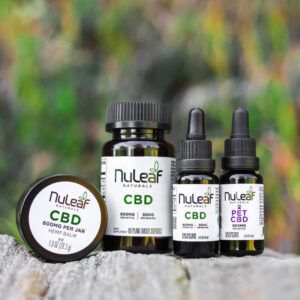 The word “cannabinoid” refers to any of over 120 specific compounds found in hemp and marijuana (both subspecies of cannabis sativa). These compounds interact with the ECS to create certain effects within the body.

THC (tetrahydrocannabinol) is likely the most well-known cannabinoid and is found in highest concentrations within the marijuana plant. In addition to creating a euphoric “high” feeling, it’s been found to assist in reducing pain and increasing appetite, among other effects.

CBD (cannabidiol), especially in the form of CBD oil, has become more and more popular as a potent anti-inflammatory compound that may aid with conditions such as epilepsy and schizophrenia. Unlike THC, it doesn’t have intoxicating effects.

CBG (cannabigerol) is considered a “minor” cannabinoid, as it exists in lower concentrations within the cannabis plant compared to THC and CBD. It earned the nickname “the mother cannabinoid” when it was discovered that all other cannabinoids begin as CBG before developing into other unique compounds. It has shown promise for its ability to improve gut health. And, while it doesn’t create that “high” feeling associated with THC, CBG is actually believed to work as a neuroprotectant.

The prefix “endo” is short for “endogenous,” which means originating from within the body — so endocannabinoids are cannabinoid-like substances which the body itself produces. These interact with the ECS in a way that’s similar to cannabinoids.

Anandamide (AEA) was the first endocannabinoid to be discovered. It was isolated from the pig brain in 1992 by William Devane and his colleagues. It has been called “the bliss molecule” due to its close connection to the body’s reward mechanisms. The name “anandamide” actually comes from a Sanskrit word meaning “internal bliss” (ananda).

Anandamide has been the most studied among the endocannabinoids with regard to its involvement in the body’s reward system. In fact, several studies point to AEA exerting an overall modulatory effect on the body’s reward circuitry.

2-Arachidonoylglycerol (2-AG) was the second endocannabinoid to be identified. It was isolated from the canine gut by R. Mechoulam and associates in 1995. 2-AG works within the central nervous system and is involved in several physiological functions including pain sensation, neuroinflammation, cognition, and emotion.

Fun Fact: The cannabis sativa plant was discovered and put to medicinal use long before we knew about the ECS or endocannabinoids. Upon identifying this new system in the body, similarities were observed, leading scientists to name these new findings after the long-familiar cannabis compounds.

Enzymes Within the Endocannabinoid System 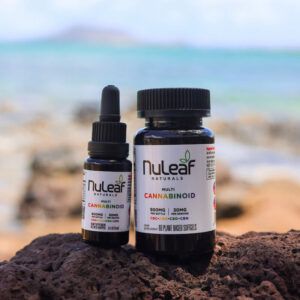 We’ve talked a little about the ECS enzymes, but what exactly do they do? Well, typically when we think of enzymes, we think of digestion. You drink a milkshake and (if you’re not lactose intolerant) your body then produces the necessary enzymes to help you digest the dairy. The enzymes within the ECS work similarly to those digestive enzymes, but not exactly.

There are two main enzymes concerned with the ECS:

Why Is the Endocannabinoid System Important?

There’s still much to learn about the ECS, but we do know that it plays an important role in the regulation of many internal processes. Which cannabinoid bonds with which receptor determines the specific signal or “communication” being sent, and the body reacts accordingly. For example, if your body needs energy, your ECS will signal your stomach to growl, letting you know it’s time to eat. If you get too hot, your ECS will instruct your body to start sweating in order to cool you down.

While the body does have all the pieces necessary to carry out these actions, sometimes our environment creates more imbalances than it can manage on its own. Fortunately, despite the changes that occur in your environment, your endocannabinoid system is always seeking to maintain internal balance. This is why supporting our ECS with cannabinoids can have such a strong impact. Which brings us to the next section …

While CBD and THC are both phytocannabinoids (cannabinoids derived from cannabis plants), they interact with the ECS differently. 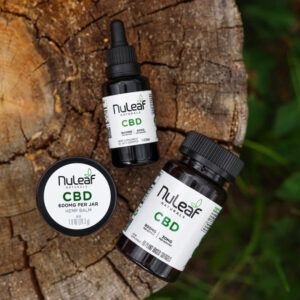 What does THC Do to the Endocannabinoid System?

CB1 receptors are primarily located in the central nervous system (the brain and the spinal cord), while CB2 receptors are found mostly in immune cells, but also in the peripheral nervous system (the nerves outside of the brain and spinal cord). THC binds to both CB1 and CB2 receptors, but it has a greater affinity for CB1 receptors, which is why it can result in a psychoactive effect. In addition to creating that “high” feeling, this phytocannabinoid can create a wide range of other effects — from reduced pain and increased appetite stimulation to anxiety and paranoia.

THC shares many properties with the endocannabinoid anandamide, and it affects the body similarly when ingested. Many people who use THC do so to ease pain and enhance their mood — the same effects attributed to the “bliss molecule.”

What Does CBD Do to the Endocannabinoid System?

The cannabinoid CBD has a greater attraction to our CB2 receptors. These receptors are located in our immune cells and peripheral nervous system. However, they’re not present in the brain, which is why CBD doesn’t cause psychoactive effects. Many believe CBD works by inhibiting the breakdown of endocannabinoids, enhancing their effects on the body (more on that in a minute). Research and anecdotal evidence indicates CBD oil can help reduce inflammation, anxiety, and depression. It has also been shown to improve sleep and reduce pain. It doesn’t create the intoxicated feeling associated with THC, and generally doesn’t result in any negative side effects.

Do THC and CBD Bind to the Same Receptors?

As mentioned above, THC binds with both CB1 and CB2 receptors, but has a higher affinity (attraction) to CB1 receptors in the brain.

CBD on the other hand, has a low affinity for these endocannabinoid receptors, which means it isn’t the receptors’ first choice. If there are other cannabinoids or endocannabinoids present, the ECS receptors will interact with those instead of CBD.

However, CBD does have an interesting effect on the whole process. Typically, the enzymes within the ECS will halt the production of endocannabinoids and even start to break down excess or “used” cannabinoids to limit the number present at one time. However, CBD works to prohibit this function, allowing for a greater number of cannabinoids and, subsequently, more receptors to be activated.

It has been found that consuming multiple cannabinoids together (verses on their own) in the form of full spectrum formulations tends to increase the beneficial effects of each compound. This is known as “the entourage effect.” CBD’s special ability to increase the number of cannabinoids and endocannabinoids available to ECS receptors may help to explain this phenomenon.

Why Is the Endocannabinoid System Important? 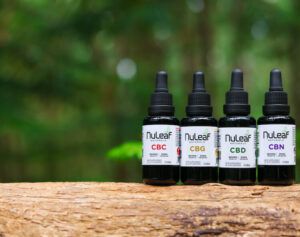 ECS research has sparked enormous interest, not just due to the physiological functions regulated by this system, but also because of the possibility for future therapies.

Earlier we mentioned that the endocannabinoid system can affect metabolism, mood, sleep, immune response, and memory (among other functions). That’s not the half of it. The ECS also plays a role in neuroprotection and neurogenesis (the development of new nervous tissue), regulation of motor activity, modulation of inflammatory responses, and more. Some of the therapeutic applications that have been proposed would target the ECS with the purpose of treating neurodegeneration, mental illness, and pain.

There has already been preliminary and anecdotal scientific evidence of cannabis providing relief from symptoms of a variety of neurodegenerative disorders — including Alzheimer’s, Huntington’s, and Parkinson’s diseases, as well as multiple sclerosis. The findings imply that improper regulation or reduced function of the ECS may be causing some of the symptoms of these diseases.


What Happens When the Endocannabinoid System Fails?

When the endocannabinoid system isn’t functioning properly, your body won’t be able to react as well to changes in the environment and this can result in physical and emotional discomfort. As mentioned in the section above, scientists are currently studying several conditions that appear to be related to dysfunction within the ECS. The term “clinical endocannabinoid deficiency” (or CECD, for short) is used to describe conditions whose related disordered physiological processes may be the result of non-optimum function of the ECS.

The conclusion of one foundational study stated that, “Subsequent research has confirmed that underlying endocannabinoid deficiencies indeed play a role in migraine, fibromyalgia, irritable bowel syndrome, and a growing list of other medical conditions. Clinical experience is bearing this out.”

Relief from the symptoms of conditions such as these above (which share the CECD designation) relies on the proper function of multiple systems. As a result, these disorders are typically resistant to most forms of treatment— making it all the more important for one to maintain proper function of one’s ECS. 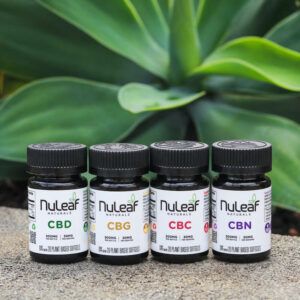 We discussed how CBD and THC interact with the ECS, but these are just two cannabinoids — out of more than 120. Other cannabinoids play different roles, such as enhancing our natural production of anandamide. And since THC binds so well to CB1, it acts as a pathway, helping other cannabinoids across the blood-brain barrier. Without it present during ingestion, no cannabinoids can access the brain.

This is why full spectrum CBD oil is so effective at supporting the ECS. It’s a whole plant extract: while CBD is the primary cannabinoid present, it also contains a variety of terpenes, essential oils, and other cannabinoids including trace levels of THC. This maximizes the impact of CBD on your ECS, helping to supplement any deficit in your body’s endocannabinoid production, and ultimately providing more complete and well-rounded benefits.

Since 2014 NuLeaf Naturals has been committed to creating the world’s highest quality cannabinoid products in their most pure and potent form. Our full spectrum cannabinoid extracts contain no additives and the only ingredient is organic hemp. If you’d like to start using full spectrum CBD oil to experience the benefits and to support the function of your ECS, visit our online store.

Do you have questions about our products, or are wondering which one is right for you?

Our Expert Team is here to help via phone, email, or online chat:

Don’t hesitate to get in touch with us between 9am and 5pm MT, Monday – Friday.